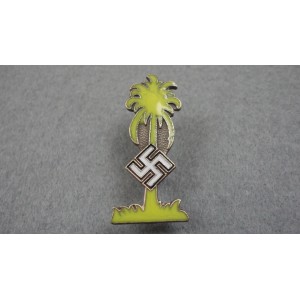 The Afrika Korps or German Africa Corps (German: Deutsches Afrikakorps, DAK) was the German expeditionary force in Africa during the North African Campaign of World War II. First sent as a holding force to shore up the Italian defense of their African colonies, the formation fought on in Africa, under various appellations, from March 1941 until its surrender in May 1943. The term "Afrika Korps" is actually pseudo-German (sometimes called "cod-German"), deriving from an incomplete German title, which was in any case written as a single word. The German term referred solely to the initial formation, the Deutsches Afrikakorps (DAK), which formed part of the Axis command of the German and Italian forces in North Africa. However, the name stuck, with both news media and Allied soldiers, as the name for all subsequent German units in North Africa. The reputation of the Afrika Korps is closely associated with that of its original commander, Generalfeldmarschall Erwin Rommel.

The Afrika Korps formed upon Adolf Hitler's personal orders on 11 January 1941 and Erwin Rommel was designated as commander the following day. Rommel himself landed on African soil in Libya on 14 February 1941, ahead of his troops. The German Armed Forces High Command (Oberkommando der Wehrmacht, OKW) had decided to send a "blocking force" (Sperrverband) to Libya to support the Italian army. The Italian army group had been routed by the British Commonwealth Western Desert Force in Operation Compass (9 December 1940 – 9 February 1941). The German "blocking force", commanded by Rommel, at first consisted of a force based only on Panzer-Regiment 5, which was quickly cobbled together from the second regiment of the 3.Panzer Division plus various small ancillary units, such as water treatment and medical care. These elements were organized into the 5th Light Division when they arrived in Africa from 10 February – 12 March 1941. In late April and into May, the 5th Light Division was joined, piecemeal, by various elements of 15th Panzer Division, transferred from Italy, though this division was not complete until after Rommel had made a counter-offensive, re-taken most of Cyrenaica and then subsequently gone back over to the defensive. At this time, the Afrika Korps consisted of the two divisions, plus various smaller supporting units, and was officially subordinated to the Italian chain of command in Africa, an organisation that Rommel had not troubled for authorisation when he initiated his offensive.

On 15 August 1941, the German 5. leichte Division was redesignated 21st Panzer Division (commonly written as 21.PD), the higher formation of which was still the Afrika Korps.

During the summer of 1941, the OKW increased the presence in Africa and created a new headquarters called Panzer Group Africa (Panzergruppe Afrika). On 15 August, the Panzergruppe was activated with Rommel in command, and command of the Afrika Korps was turned over to Ludwig Crüwell. The Panzergruppe comprised the Afrika Korps, with some additional German units now in North Africa, plus two corps of Italian units. The term Gruppe, in this context, is usually translated as Force, with the same flexible, or indeterminate, meaning as the English term. The Panzergruppe was, in turn, redesignated as Panzer Army Africa (Panzerarmee Afrika) on 30 January 1942.

After the defeat at El Alamein and the Allied landings in Morocco and Algeria Operation Torch, the OKW once more upgraded the presence in Africa by adding first the XC Army Corps, under Nehring, in Tunisia on 19 November 1942, then an entire and additional 5th Panzer Army on 8 December, under the command of Colonel-General Hans-Jürgen von Arnim.

On 23 February 1943, the original Panzer Army Africa, which had since been re-styled as the German-Italian Panzer Army, was now redesignated as the Italian 1st Army and put under the command of Italian general Giovanni Messe. Rommel, meanwhile, was placed in command of a new Army Group Africa (Heeresgruppe Afrika), created to control both the Italian 1st Army and the 5th Panzer Army. The remnants of the Afrika Korps and other surviving units of the 1st Italian Army retreated into Tunisia. Command of the Army Group was turned over to von Arnim in March. On 13 May, remnants of the Afrika Korps surrendered, along with all other remaining Axis forces in North Africa.