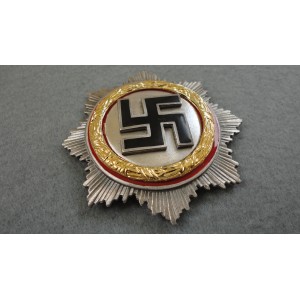 WW2 The Knights Cross of the Iron Cross - in gold

The German Cross (German: Deutsches Kreuz) was instituted by Adolf Hitler on 28 September 1941. It was awarded in two divisions:gold for repeated acts of bravery or achievement in combat; and silver for distinguished non-combat war service.The German Cross in Gold ranked higher than the Iron Cross First Class but below the Knight's Cross of the Iron Cross, while the German Cross in Silver ranked higher than the War Merit Cross First Class with Swords but below the Knight's Cross of the War Merit Cross with Swords.

The German Cross was issued in two divisions: gold and silver (the color of the laurel wreath around the swastika), the former being an award for repeated acts of bravery or repeated outstanding achievements in combat, the latter being for multiple distinguished services in war efforts and was considered a continuation of theWar Merit Cross with swords. The German Cross was unique in that the gold and silver divisions were considered as separate awards but should not be worn simultaneously. However, pictures of recipients wearing both grades exist (see Odilo Globocnik and Dr. Paul Meixner).

The order consists of a star badge, containing a swastika (in German, Hakenkreuz, "hooked cross", which gives the award its name, the "German cross"). It had a diameter of 6.5 cm and was worn on the right-hand side of the tunic. If a recipient had been awarded both the silver and gold divisions, the gold division should be worn only.

Only the gold division of the award was officially available in cloth form, which was made for easier wear on the combat uniform; General Helmuth Weidling wore this variety during his defense of Berlin in April–May 1945. Far more awards in gold (combat) were presented than in silver (support).

Specimen copies of a special grade, the German Cross in Gold with Diamonds, was manufactured in 1942 but this grade was never instituted or bestowed.