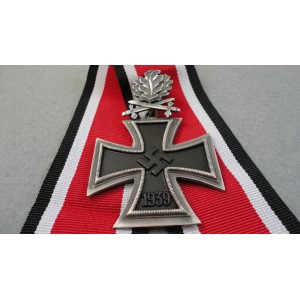 The standard 1939 Iron Cross was issued in the following two grades:

The Iron Cross was awarded for bravery in battle as well as other military contributions in a battlefield environment.

The Iron Cross 2nd Class came with a ribbon and the cross itself was worn in one of two different ways:

Note that for everyday wear, only the ribbon itself was worn from the second buttonhole in the tunic.

The Iron Cross 1st Class was a pin-on medal with no ribbon and was worn centered on a uniform breast pocket, either on dress uniforms or everyday outfit. It was a progressive award, with the second class having to be earned before the first class and so on for the higher degrees.

It is estimated that some four and a half million 2nd Class Iron Crosses were awarded during World War II, and 300,000 of the 1st Class.Two Iron Cross 1st Class recipients were women, one of whom was test pilot Hanna Reitsch. One of the Muslim SS members to receive the award, SS Obersturmführer Imam Halim Malkoć, was granted the Iron Cross (2nd Class) in October 1943 for his role in suppressing the Villefranche-de-Rouergue mutiny. He, together with several other Bosnian Muslims, was decorated with the EK. II personally by Himmler in the days after the mutiny. Because of his Muslim faith, he only wore the ribbon, and not the cross. Two Jewish officers of the Finnish Army and one female Lotta Svärd member were awarded Iron Crosses, but they would not accept them.The Spanish double-agent Joan Pujol Garcia, known to the Germans as Arabel and the British as Garbo received the 2nd Class Iron Cross,and an MBE from King George VI four months later.

Knight's Cross Of The Iron Cross.

Submarine captains of the Kriegsmarine: