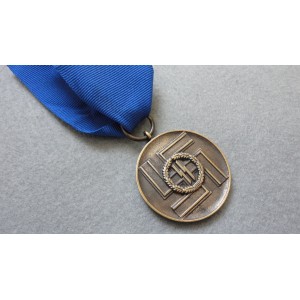 It has the sigrunes in a wreath on the front and the number "8" and words:

FOR TREUE DIENSTE IN DER SS on the back.(SS-Dienstauszeichenungen)

All members in the Wehrmacht including the SS were eligable to receive as of March 16,1936,the long service award.The SS long service awards was not instituted until the 30th January 1938,but werent manufactured until May 1939.This award was rendered to members of the SS-Verfugungstruppen,SS-Totenkopfverbande and SS-Junkerschulen.

It should be noted that membership in the Waffen-SS did not count as national military service until 1935,so SS men would have been eligible for the 4 years in 1939 and the 8 years in 1943,which is way after the Wehrmacht awards were superseded.

Also military service counted double for SS members who joined in 1925 up to 1933.In addition,all other long serving personnel were eligible to receive the NSDAP Long Service Award.

The 8 years medal in bronze finished was rendered to all Officers,NCO,S and enlisted.

The four classes ( 4,8,12,25, years) of the SS service awards were designed in Munich by Professor Karl Diebitsch.