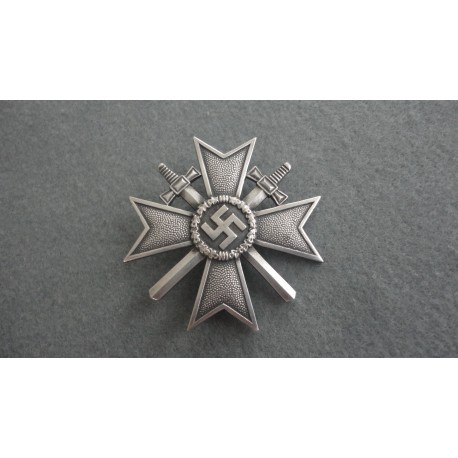 The War Merit Cross (German: Kriegsverdienstkreuz) was a decoration of Nazi Germany during the Second World War, which could be awarded to civilians as well as military personnel. It was reissued in 1957 by the Bundeswehr in a De-Nazified version for veterans.

This award was created by Adolf Hitler in 1939 as a successor to the non-combatant Iron Cross which was used in earlier wars (same medal but with a different ribbon). The award was graded the same as the Iron Cross: War Merit Cross Second Class, War Merit Cross First Class, and Knights Cross of the War Merit Cross. The award had two variants: with swords given to soldiers for exceptional service in battle above and beyond the call of duty (but not worthy of an Iron Cross which was more a bravery award), and without swords for meritorious service behind the lines which could also be awarded to civilians. Recipients had to have the lower grade of the award before getting the next level. There was also another version below the 2nd class simply called the War Merit Medal (German: Kriegsverdienstmedaille), set up in 1940 for civilians in order to offset the large number of 2nd class without swords being awarded. It was usually given to those workers in factories who significantly exceeded work quotas.

One notable winner of the War Merit Cross was William Joyce (aka Lord Haw-Haw) who received both the second and first class, both without swords. Recipients of the Knights Cross of the War Merit Cross customarily received the medal from holders of the Knights Cross of the Iron Cross, to symbolize the link between the combat soldier and their supporters, who helped maintain the war effort.